Inflation – The Enemy of Humanity! 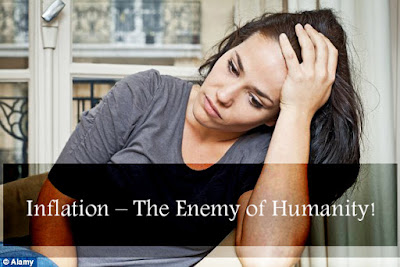 Person needs food and water, air and residency to survive his/her life, but if these are not provided, it is not likely to live with freedom. Commonly, the word “enemy” is meant to be “foe”, but here it defines the meaning of inflation. It is true that this enemy is created by capitalism, government and consumers as well.

A lot of folks being brunt under the depth of the flame of inflation don’t have to think to grow their lives for the reason that their thoughts and brilliance have been no more due to suffering from the soaring price of products and goods.

First of all consumers take the responsibility for the creation of this curse since no serious action is taken for the purpose of removing the inflation. It is certainly said that if buyers are united in relation to getting rid of high price of products, suppliers will have to drop the cost of products since the buyers’ consumption is their profit.

The government is supposed to crack down against those who sell high-priced beverages, wheat, milk, drinks, meats and other goods. To me, in assemblies the MNAs and MPAs do not want us to stay happy; therefore, serious actions are not taken or they are happy to increase Government Sale Tax (GST) to make government strong.

When discussing the increasing prices, the capitalism has to be criticized. In this connection, the government and companies seem to be on the same wavelength since earnings become easy for them.

In 2005, flour (Atta) was Rs13 per Kg. It has been increased more than 150% gradually. Moreover, for the people who are paid Rs13, 500 monthly, utilities, rents, transport fares, spices, fleshes and ghee/cooking-oil have also been out of reach.

We are standing the adversities our lives being slaves of the brutal king of the olden era. Some people are sitting on the foods, employments and basic rights of us as a big cobra. In order to take our property or right back, this cobra has to be done in and then its germs should be sanitized.
Finally, this enemy should be killed and we are the power provided that we are united because oneness is the weapon which never causes to surrender.